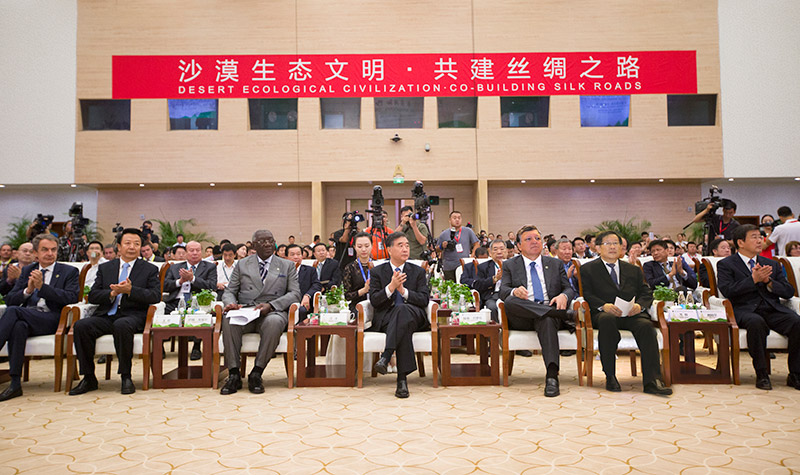 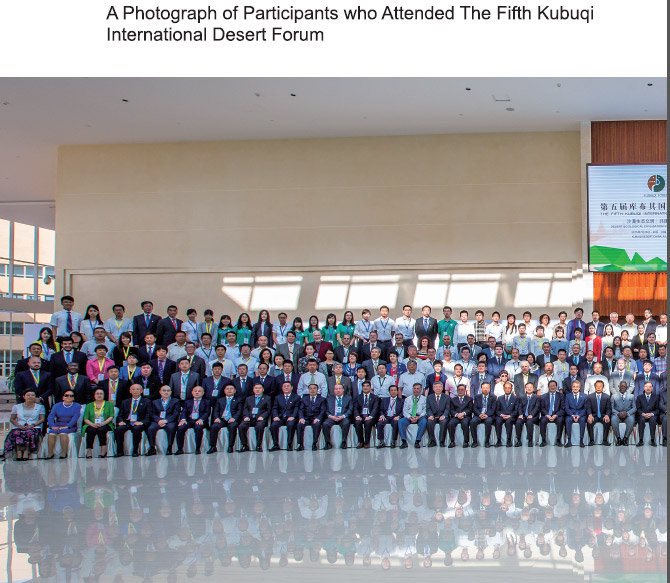 The Fifth Kubuqi International Desert Forum was held on July 27-29, 2015, at the Kubuqi International Conference Center in Inner Mongolia, China. Convened through a public-private partnership (PPP) arrangement, the Forum was co-organized by the Ministry of Science and Technology (MOST), the State Forestry Administration (SFA), and the Government of Inner Mongolia Autonomous Region of the People's Republic of China in cooperation with the United Nations Environment Programme (UNEP) and the United Nations Convention to Combat Desertification (UNCCD) Secretariat, with the support of the Municipal Government of Ordos and the Elion Foundation.

Themed with “Desert Eco-civilization, Co-building Silk Roads”, the Forum was attended by over 300 high-level officials from both governments and international organizations including the United Nations, and influential business leaders, scientists, artists, youth, and news media representatives from more than 40 countries and regions.

Mr. WANG Yang, Vice Premier of the State Council of China, was present at the opening ceremony and delivered a keynote speech. Mr. Ban Ki-moon, UN Secretary General sent a congratulatory message to the Forum. The opening ceremony was also addressed by leaders from the sponsoring organizations of the Forum, including Mr. WAN Gang, Vice Chair of the Chinese People's Political Consultative Conference (CPPCC) and Minister of Science and Technology; Mr. ZHANG Jianlong, Administrator of SFA; Mr. WANG Jun, Secretary of the Inner Mongolia Autonomous Regional Committee of the Communist Party of China (CPC), Mr. Bate'er, Chairman of Inner Mongolia Autonomous Regional Government, and Ms. Monique Barbut, Executive Secretary of the UNCCD Secretariat. A number of former heads of government/state attended the Forum and delivered special speeches, including Mr. Jose Manuel Durao Barroso, former President of the European Commission and former Prime Minister of Portugal, Mr. John Agye kum Kufuor, former Chairperson of the African Union and former President of Ghana, and Mr. Jose Luis Rodriguez Zapatero, former Prime Minister of Spain. The leaders unanimously emphasized that desertification was a serious constraint for sustainable development and, in view of the difficulties and challenges in desertification prevention and control, they called for further cooperation of the international community in facilitating green development and achieving the global target of land degradation neutrality by 2030.

In the context of the implementation of and cooperation on the UN Post-2015 Development Goals, and the “Promotion of Ecological Civilization” and the “the Belt and Road” strategic initiatives proposed by the Chinese government, and focusing on themes such as“Post-2015 Ecological Civilization and Green Development Opportunities” and “Win-win Cooperation on the Belt and Road Initiative”, the Forum held in-depth discussions on diverse issues, including scientific progress and institutional innovation, market, financial and commercial mechanisms, desert eco-economy development, and harmonious development of mankind, economy, society and environment, through keynote speeches, the high-level policy forum, green dialogues, across generations dialogues, the informal working group, academic presentation and the youth forum. The Forum achieved extensive results and reached consensus on the following aspects:

1. Desertification was a severe global ecological problem that directly influences 2/3 countries and 1/5 population in the world, representing a grave threat to the survival and development of mankind and a major obstacle to sustainable development.

2. The participants called for and supported the UN and all Governments to attach greater importance to ecosystem and environment and to prioritize desertification control in national and regional cooperative programmes; encouraged public-private partnerships (PPP) to engage wider resources in ecological civilization process, ecosystem restoration and desertification control with a view to realizing sustainable development and promoting environmental-friendly progress.

3. The participants highly endorsed and supported the implementation of the “the Belt and Road” initiative. As many countries and regions along the Silk Road Economic Belt were covered with deserts and characterized by a dry climate and a fragile ecosystem, their economic development was largely restricted. In implementing “the Belt and Road” initiative, an ecological red line should be drawn to put ecological

protection first, while necessary strategies for ecological development should be formulated and policy measures should be taken as the priority.

4. The Forum adopted two outcome documents –the Vision and Framework of Cooperation in Post-2015 Ecological civilization building, and the Kubuqi Action Plan of Global Desertification Control, which called for wide support from the whole society for their full implementation as soon as possible.

5. The Forum recommended that the concept of promoting ecological civilization building be mainstreamed into the UN documents, and that relevant UN organizations such as the UNCCD and UNEP actively disseminate the outcomes of the Fifth Kubuqi International Desert Forum. The Forum recommended that KIDF Secretariat regularly report to the relevant meetings of UNCCD and UNEP (e.g. COP-12) on the outcomes of the Fifth Kubuqi International Desert Forum and the progress in implementing the Framework of Cooperation in Post-2015 Ecological Civilization building and the Kubuqi Action Plan of Global Desertification Control, with an aim to engage more countries and organizations in the action and share the outcomes of the Kubuqi model.

6. The Forum believed that to achieve the UN's Post-2015 Sustainable Development Goals (SDGs), especially the targets of land degradation neutrality by 2030 and combating climate change, it required an extensive engagement of the civil society. Therefore, the Forum called on business sector to explore financial innovation and drive the growth of green capital by using commercial approaches and market mechanisms, jointly contributing to sustainable development.

7. The participants unanimously believed that technological development and institutional innovation are the essential foundation for ecological restoration and desertification control. On one hand, efforts must be made to develop key technologies and innovations to combat desertification. On the other hand, effective legislative and policy support and incentives for determining, transferring and leasing the land and desert tenure must be provided in the long term, in order to attract business sectors to invest in the promotion of ecological civilization building and form a scientific and orderly operating mechanism.

8. The participants highly praised the balanced approach of“ecology, economy and livelihood”in desertification control as seen in Kubuqi, believing that it had set a high standard to be promoted by the UNCCD and other relevant organizations.

9. The participants were happy to see the fact that the Kubuqi International Desert Forum had grown from a government-backed civil society initiative with international

10. The participants recommended further that concerned authorities should consider the future positioning of the Forum, its nature and mission as well as the means and ways to improve its operating mechanism, to enable it playing a bigger role and making a continuous contribution to global desertification control.

11. The participants were happy to see that Mr. Wang Wenbiao, Secretary-General of the Kubuqi International Desert Forum, Mr. Jose Barroso, former President of the European Commission, Mr. John Kufuor, former Chairperson of the African Union, and several representatives of the participants jointly discussed the concept of establishing a “Global Alliance for Desert Eco-economy” (GADEE).

12. The Forum supported the initiative of establishing the “Global Alliance for Desert Eco-economy”(GADEE) and encouraged the Alliance to form close ties with the Forum itself. The participants commended the objectives of the initiative which was to support the fulfillment of the Post-2015 SDGs, and promote the target of land degradation neutrality by 2030 and the joint effort in combating climate change. The Forum also supported scientists, entrepreneurs, artists and youth who were passionate about ecological restoration to form alliances and unleash the capability of the private sector in innovative ways. They could promote ecological restoration and green development especially in deserts through PPP and crowd-sourcing, contributing to eco-environmental security and sustainable development.

13. The participants recommended that the Sixth KIDF should continue to be held at Kubuqi in 2017 and requested the Secretariat and the relevant parties to report on the implementation progress and cooperation results of the Vision and Framework of Cooperation in Post-2015 Ecological Civilization building and the Kubuqi Action Plan of Global Desertification Control.

14. The participants expressed their deep appreciation to the MOST, the SFA, and the Government of Inner Mongolia Autonomous Region of China, the UNEP and the UNCCD Secretariat for co-organizing this Forum; to the hosts, the Municipal Government of Ordos and the Elion Foundation, for their industrious and fruitful effort; and to governments at all levels in Inner Mongolia Autonomous Region and the Kubuqi International Convention Centre for their generosity and excellent arrangements.